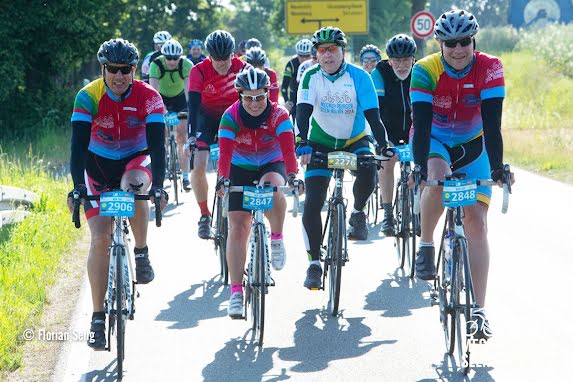 Our trip to Mecklenburger seen Runde in Germany

A few years ago the german equivalent to Vätternrundan, MSR was arranged for the first time, it was a great hit and the event has been arranged every year since then. This year (2019) will be the sixth time.
The organizers Detlef and Konstanze contacted us a couple of years ago to ask if we were interested in selling our organic chamoicreme MEDEVI RumpRäddaren at their event. We have been connected with the original race in Sweden for a long time and they felt the product would benefit their participants as well.

At that time we were in process with quite a lot of internal work and felt that it was not yet time for broadening our marketing outside of Sweden.

Svenska Cykelmässan in Stockholm in Mars -18

During Vätternrundan 2017 they approached us yet again and after another meeting in the fall we decided to share a space during the Swedish bikefair in Stockholm mars-18.
Together with Carina Axén, the headmasseur for Vätternrundan, we talked MSR, RumpRäddaren and how to prevent and treat sadlesores, and also tips and tricks to keep bicyclemuscles in good shape

Later that spring we decided to go down to Neubrandenburg for MSR.

After some preparation and a near miss with missing tent parts, we set out for Germany on may 22. After a long drive through the night we reached Trelleborg and the ferry for Satsnitz and the lovely Rugen. The sea was calm on the trip over and the weather was stunning. We spent that first afternoon exploring.

We're used to Varamobaden in Motala, it's the longest inland beach in Sweden (5km). At Rugen the beach kept going as far as we could se in each direction. Altough the mayweather was gorgeous, the water was not quite warm enough to be called pleasant but we still enjoyed a ”fika” by the sea.

We spent the rest of the day traveling around Rugen and if you have the time we would really recommend spending a few days here.

It took a couple of hours down to Neubrandenburg and the landscape reminded us of Östgötaslätten back home with its rolling hills and open spaces. There were large windparks as well as some solar parks.

Most of the smaller roads were lined with all these beautiful trees. There were stretches of newly planted trees but most were really old ones. 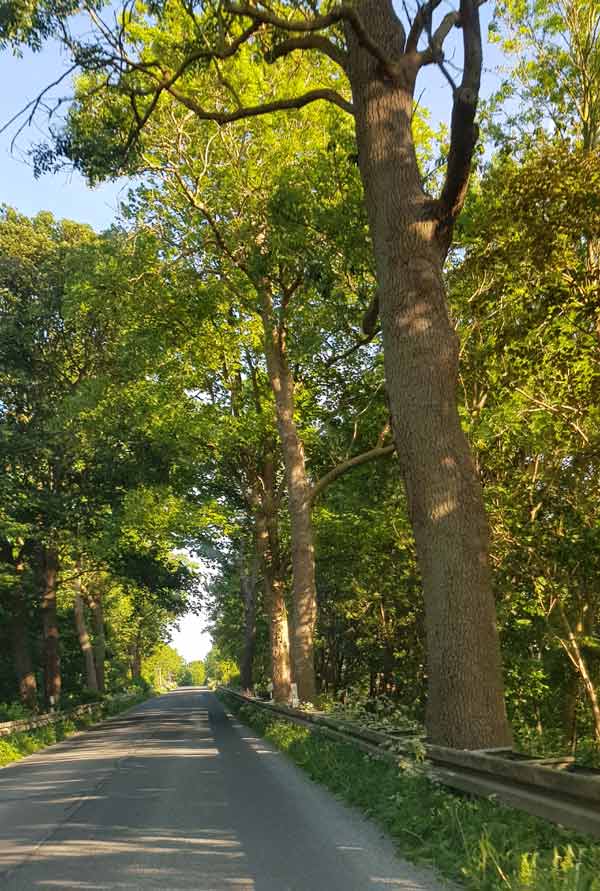 We arrived to Neubrandenburg. Our first stop when we arrived was the MSR storage facility (thank you google maps) where we delivered the massageoils for the race depots. The MSR photographer was there to recieve the boxes and he took the opportunity to take a picture of Helena with a tube of our RumpRäddare to put up on their Facebook and Instagram. SEE HERE

At the eventarea we set up our tent in the glowing sun. We were a bit worried about the tent because of strong winds during the night but thanks to some borrowed heavy duty cement blocks it was all right.

Detlef was there to greet us and took us out for coffee in a nearby icecreamshop.
Later that night we went to a fabulous asparagusdinner with the bikers from Sweden. Matilda Egnell from Motala AIF arrange a bustrip down to MSR every year. Her contact info can be found further down. The dinner was at an old castle that actually have a Swedish history.

Carina Axén and four of her collegues also arrived with the bus to man the ”Swedish depot” at Möllenhage and take care of the bikers muscles during the race. 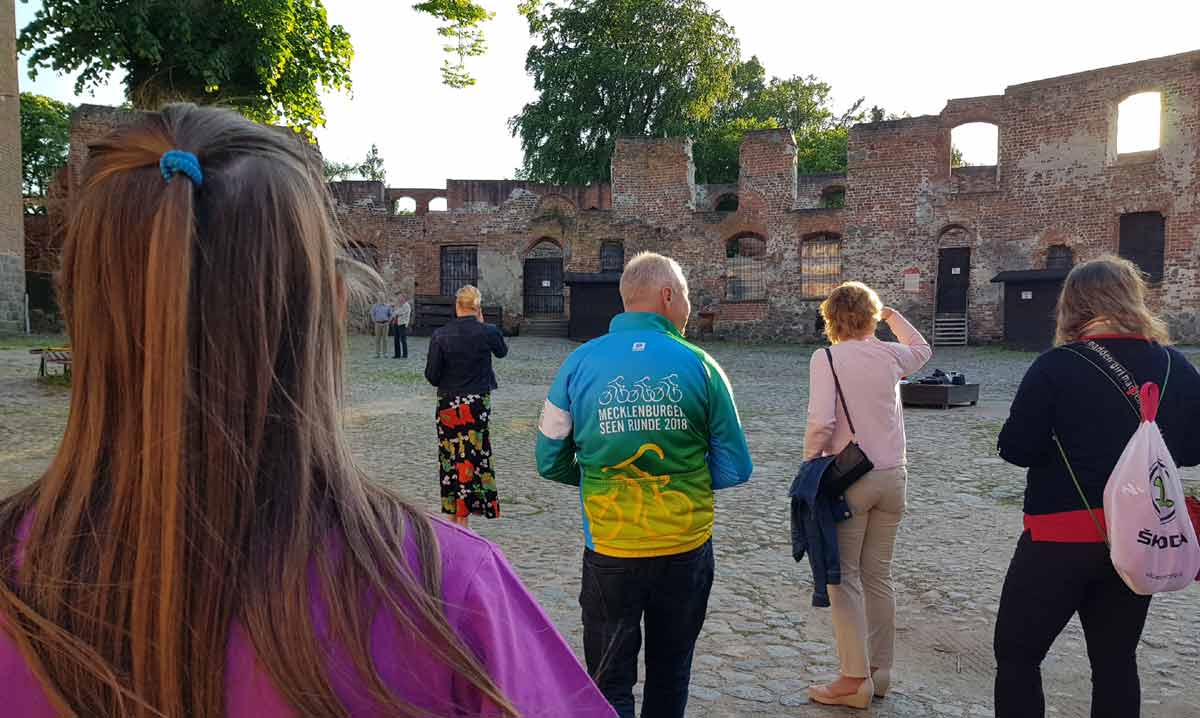 Friday morning at the campground

A beautiful day meeting lots of people, both new acquaintances and longtime customers (both Swedes and Germans) that know and love our products. 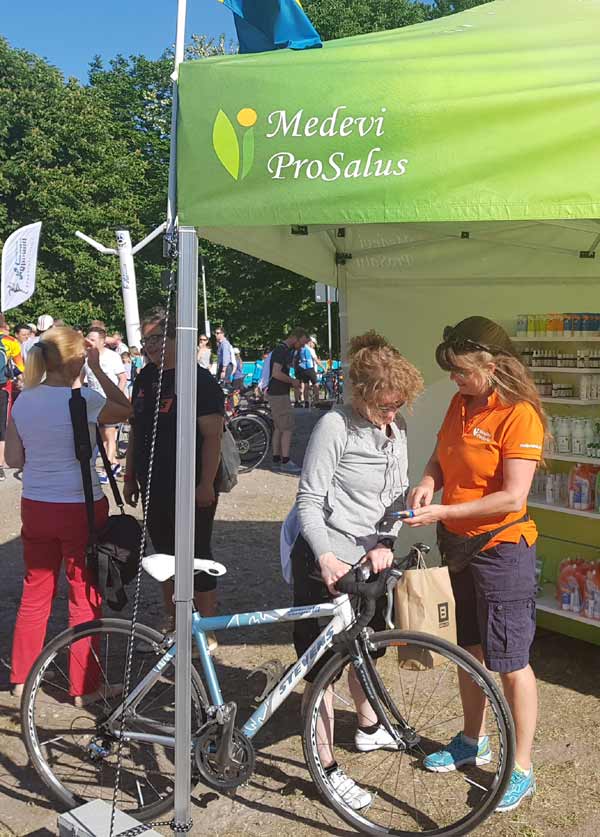 And here goes the start of Mecklenburger seen Runde 2018 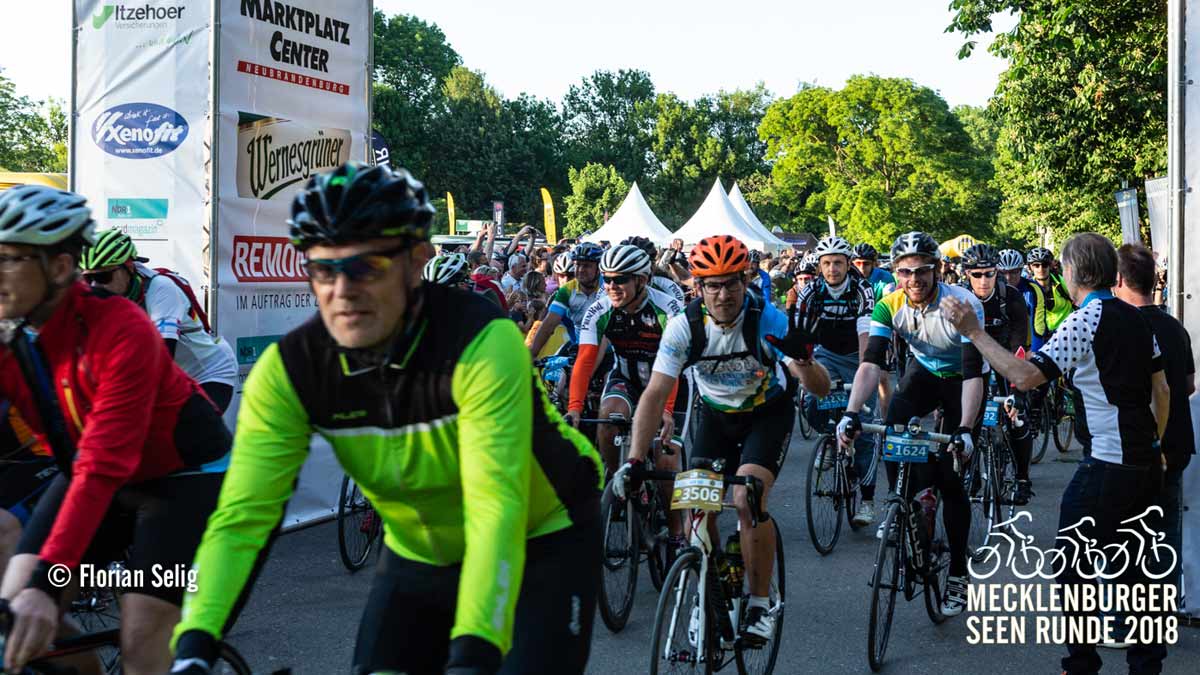 All the MSR depots are different from each other. In the ”Swedish depot” they serve Swedish classics like Ekströms Blueberry soup, Gillekakor (cookies) and Kalles Kaviar, a smoked fishegg paste, equally loved and hated by Swedes.
Swedish masseurs, veterans from Vätternrundan, was there to take care of stiff biking muscles using MEDEVI Arnicaliniment.

A sight very familiar to us. There are tired bikers sleeping just about evereywhere after finishing the race both in Motala and in Neubrandenburg. This guy forgot to turn off the taillight before he fell alseep. 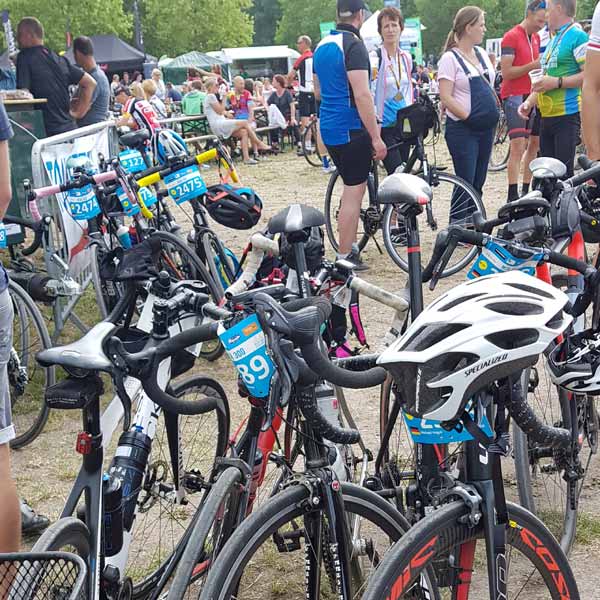 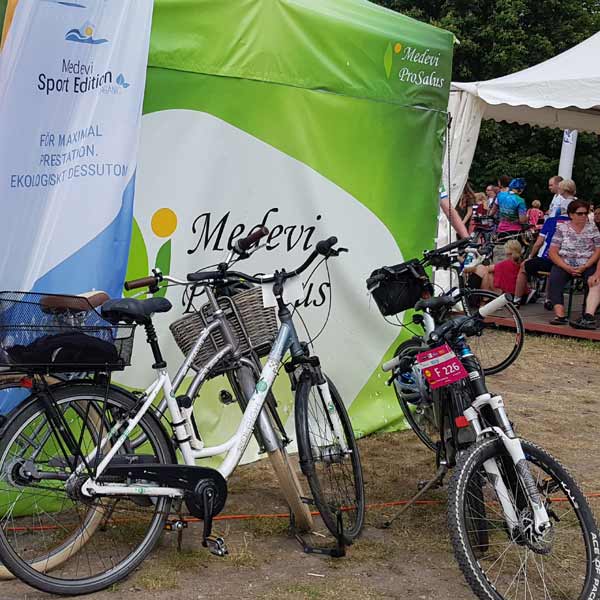 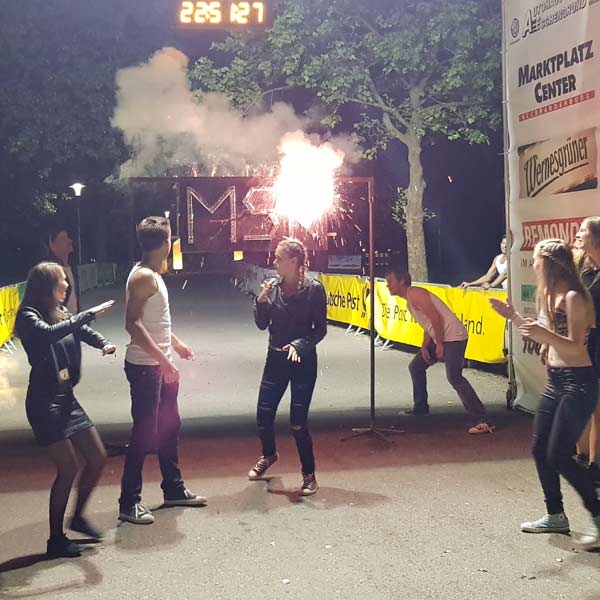 The Sattlefest continues until the last cyclist has reached the finishline. Here is a dancegroup with their show in front of some fireworks celebrating the end of MSR 2018. 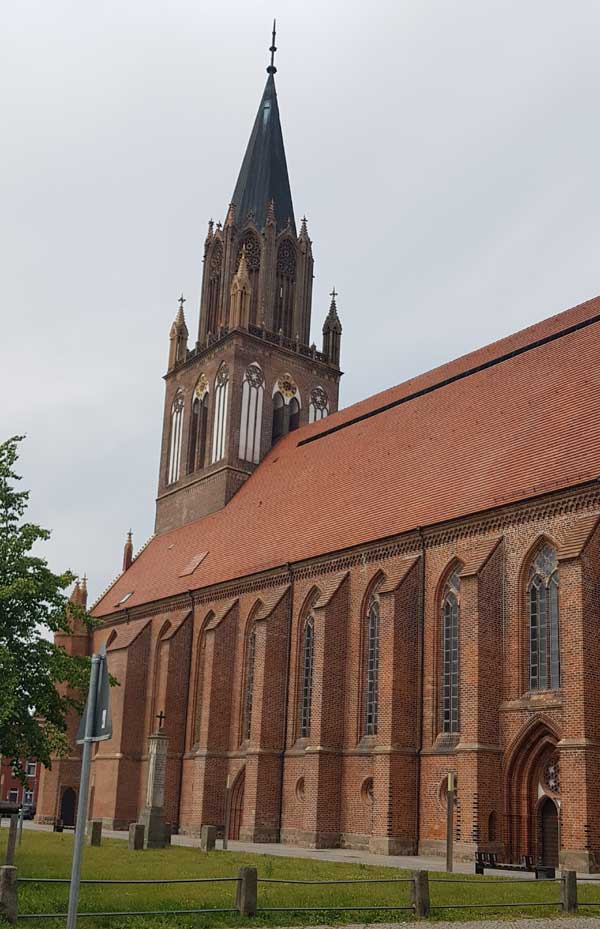 One of the old churches in central Neubrandenburg has been remade into a conserthall with amazing accoustics.

One thing that really was interesting with this trip was all the contrasts between old and new. Riding through the landscape and old small villages we could see old houses that seemed to be left over from 2nd world war. Right beside there could be a brand new house or a lovely old renovated house with a stunning fully grown garden.

It's not far from Sweden down to Neubrandenburg. You can easily take the ferry from Trelleborg to Satsnitz on Rugen or to Rostock. If you prefer you can also drive through Denmark. 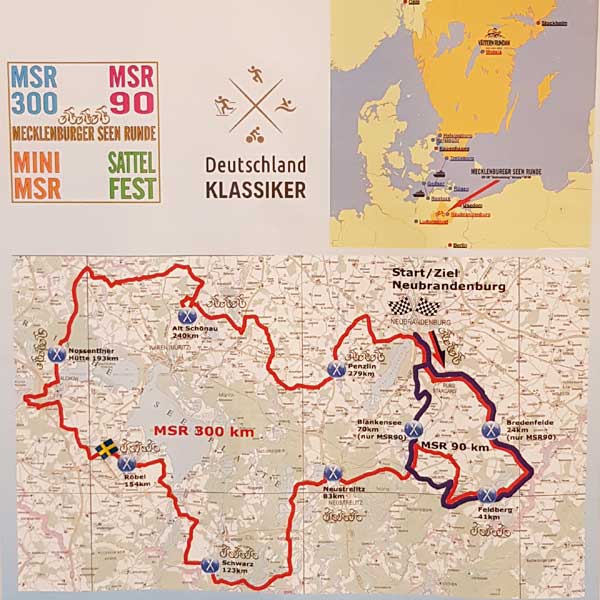 Are you interested in taking part in MSR?
Contact Mathilda Egnell if you want to travel with the bus from Motala. Even if you prefer to travel on your own, she has a lot of tips on how to plan your trip.

Feel free to use the code below when you register to go MSR from Sweden. The discount works for both 300km and if you chose the 90km only for women. 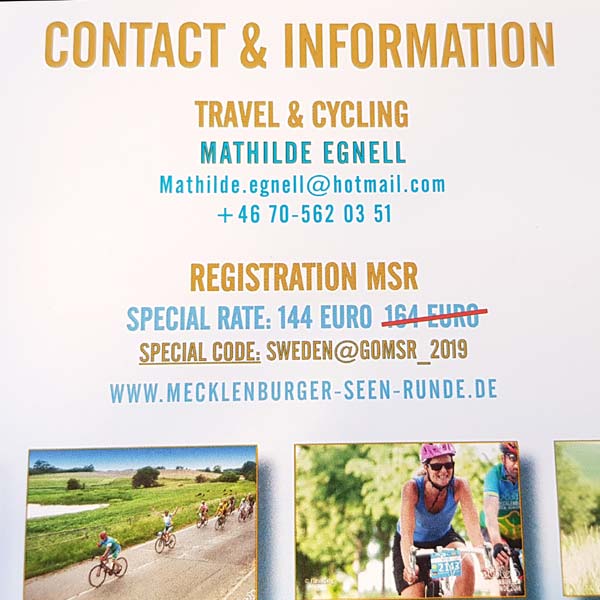 The name of the ferry when we returned to Sweden was really fitting... and the sun kept on shining...

We really had a wonderful time last year and have decided to go down to Mecklenburger seen Runde this year as well.

We hope to see you there...and of course also i Motala in June.

Here is a link to Mecklenburger seen Runde

There you can register and read more about the race, order MSR clothes etc and Medevi sportsproducts if you live in Germany.